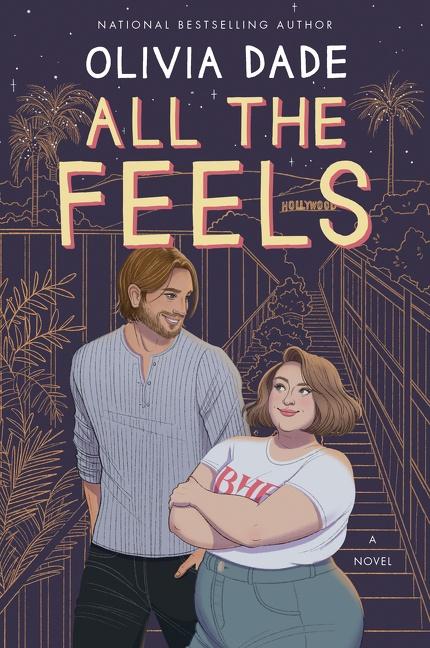 One of the things I like most about Olivia Dade’s heroes, and especially the ones in her Spoiler Alert series, is how free they are expressing their emotions and how unafraid they are to enjoy the thing they love, even if those things would be deemed less than manly by most people in society. Alex, the hero in her latest book, All the Feels, is no different, and may be my favorite of hers so far. A lot of focus is spent on her heroines, and for good reason, but Alex captured my heart in a way a romance hero hasn’t in a long time. This book may not be for everyone but I enjoyed Dade’s latest look into the world of Hollywood, fanfiction, and all things nerdy.

If you read Spoiler Alert, the first book in this series, you will remember Alexander Woodroe as Marcus’s best friend and castmate on the hit television show God of the Gates. His role as Cupid has made him a rising star but his off-screen antics have threatened to derail his career and make him be seen as poison in Hollywood. At the beginning of this book, he has gotten into a bar fight at the very end of filming the series and the creators of the show are so concerned that he will ruin their successful show that they decide to hire someone to watch him and make sure he doesn’t get into further trouble. Lauren Cregg, who is the producer Ron’s cousin, happens to be visiting the set in Spain after taking a much-needed break from her job as an ER therapist and agrees to take the job. She’s aware of Alex’s reputation but can’t turn down the money or the chance to extend her mental health break while she decides what she wants to do for the rest of her life. Thus begins a traditional enemies-to-lovers story with some very untraditional characters.

Where this book shines are the characters. Alex reads and writes fanfiction and watches the Great British Bake Off with no shame whatsoever and with no fear that his masculinity will be called into question. He is also open about his ADHD diagnosis and his need for medication. One of my favorite moments early on is when Lauren realizes he has ADHD: “He openly took medication for ADHD every morning-their first breakfast together he’d shaken the pill bottle an inch from her nose and bellowed, ‘I have Attention Deficit Hyperactivity Disorder, Nanny Clegg! Imagine that!’” I loved this vulnerability about Alex and how free and open he was with his feelings.  Lauren is one of Dade’s most insecure heroines, but she still stands up for herself and against Alex when needed. Her low self-esteem makes sense as we are told several times that people think she’s ugly and have no problem calling her that to her face. Even Alex thinks that when they first meet. I like that Dade shows her being vulnerable about this, even as she tries to be strong and not let people’s words affect her. This emotion feels real and authentic and it fit the character. As much as I loved these characters, I felt like something was missing from the romance. I didn’t see the moment where the feelings of friendship moved to something more for either of them and I was missing some of the chemistry that usually comes in a slow burn romance.  However, this was still a quirky, witty romance that had me smiling even if I was hoping for more from the love story.

I love that Olivia Dade writes romances featuring people with real bodies and real personalities and that she always tells a fun story. All the Feels had some of my favorite characters, but the romance fell a bit flat for me. Despite that, I would recommend this book and am still looking forward to Dade’s next release because her books are always well-written with an entertaining story and likable characters.

Favorite Quote: “Wren was not only the cutest, hottest goddamn bird-woman on the face of the earth, but also unique and funny and smart and charming and kind…”