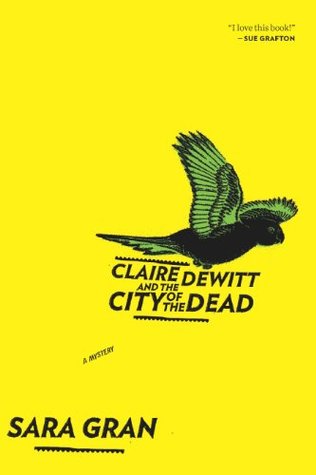 I host a virtual book club for my library and while there is no specific theme to the club, we have somewhat settled on reading mysteries.  There are so many mystery subgenres that I have been trying to pick a different one each month to give us some variety.  This book was my pick for private investigator but it was unique in ways I didn’t expect and did not read like a typical PI story.  I ended up liking it more than I thought I would and would continue the series.

From Goodreads:  This knock-out start to a bracingly original new series features Claire DeWitt, the world’s greatest PI—at least, that’s what she calls herself. A one-time teen detective in Brooklyn, she is a follower of the esoteric French detective Jacques Silette, whose mysterious handbook Détection inspired Claire’s unusual practices. Claire also has deep roots in New Orleans, where she was mentored by Silette’s student the brilliant Constance Darling—until Darling was murdered. When a respected DA goes missing she returns to the hurricane-ravaged city to find out why.

The strength of this book comes from the main character, Claire.  She is such an interesting character and unique in the world of PI fiction.  Gran does a good job of writing Claire with enough character flaws that you wonder how she could be a PI but with enough heart to make you root for her. She is a mess, plain and simple, with a drug problem and a checkered past that lead her to make decisions I found irresponsible.  It would be easy to dislike Claire for putting herself into avoidable bad situations and making questionable decisions but I found myself really liking her and enjoying her complexities.  The best books can make you feel different things about a character while also finding them hard to forget. If Claire is the main character in this book, New Orleans is the second.  The sense of place is amazing and I could almost see in my mind the places Gran was describing.  As weird as it sounds, I saw this book as a kind of twisted love note to the city of New Orleans.  The picture Gran paints is not pretty, with violence and poverty highlighted, but you also get the sense of community and resilience throughout.  Choosing to set this book in the aftermath of Katrina was a brilliant move because it made the mystery that more real.   You could feel the tension in the city as it tries to rebuild from disaster while also maintaining the history and charm that make NOLA so unique.

The mystery itself was pretty basic (missing man) but I was interested enough to want to know how the book ended and the mystery behind the disappearance. A lot of Claire’s skills of detection are based on dreams, feelings, and hunches, so I wouldn’t read this book if you are looking for a PI that uses facts and clues.   Some people have had an issue with how Claire acts once the mystery is solved and I can understand their feelings but I liked the ending and thought it was realistic.  I will definitely continue this series.

If you like unorthodox detectives with flaws, this book is for you.  It reads less like a detective novel and more like a character study but the mystery is intriguing enough and the writing was good.  I would recommend it for fans of mysteries that are more about the characters and less about the detection.

One thought on “Claire DeWitt and the City of the Dead”