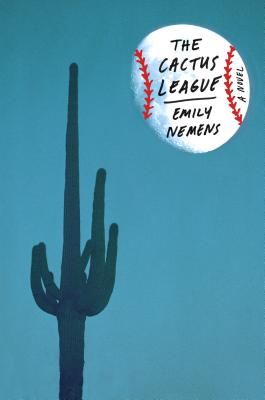 When I picked this book up, I expected to read about baseball.  While the central theme is about America’s pastime, this book is more about the relationships between several characters that happen to all have a connection.  Maybe I was hoping for more baseball but this book, which I enjoyed, could have been a home run.

From Goodreads: Jason Goodyear is the star outfielder for the Los Angeles Lions, stationed with the rest of his team in the punishingly hot Arizona desert for their annual spring training. Handsome, famous, and talented, Goodyear is nonetheless coming apart at the seams. And the coaches, writers, wives, girlfriends, petty criminals, and diehard fans following his every move are eager to find out why–as they hide secrets of their own.  Narrated by a sportscaster, Goodyear’s story is interspersed with tales of Michael Taylor, a batting coach trying to stay relevant; Tamara Rowland, a resourceful spring-training paramour, looking for one last catch; Herb Allison, a legendary sports agent grappling with his decline; and a plethora of other richly drawn characters, all striving to be seen as the season approaches. It’s a journey that, like the Arizona desert, brims with both possibility and destruction.

This book made me realize that when done right, I enjoy books that feature several characters, all connected somehow, with the connections revealed throughout the story.  I found myself trying to guess the role each new character would play in the story and found myself surprised with how some characters impacted others.  The problem with this type of writing is it’s more noticeable when a section or chapter isn’t as good as the others and that was one of the issues I had with his book.  Some of the sections were so good that I wanted to read more while others I felt nothing for. In particular, the baseball wives chapter was a low point for me while the Stephen Smith section was great.  I found myself wanting to learn more about people that only got a few pages and that was frustrating. The use of baseball terminology and set up was fantastic and I liked Nemens’ choice to have the overall story be narrated by a sports writer and divided into innings.  She is an interesting writer and clearly loves baseball and all the nuances that come with the game. She did a good job in making sure the reader understood how every character impacted the others.  In the end though, this was a slice of life novel with baseball as the backdrop so I shouldn’t have been surprised that the ending was abrupt and didn’t feel like an ending to the story. If you like your books wrapped up nicely, this may not be the book for you.

While I enjoyed this book and found the writing to be good, I can’t say that I would ever reread it.  I will say that this would make a good book club book as there are a lot of different characters and situations to discuss. However, I liked the author enough that I would read other books of hers.