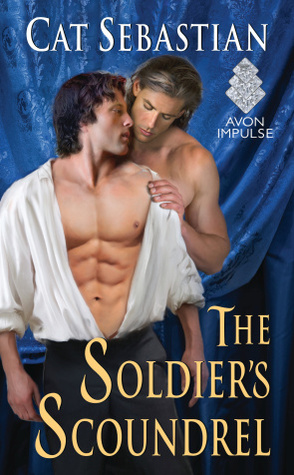 This was my first Cat Sebastian book after having heard about her for a while.  A good friend of mine likes her a lot so when the quarantine hit, I grabbed a bunch of hers to read because I thought they would be quick fun reads that would help me escape from the real world for a bit.  I am glad to say that I was right; I really enjoyed this book and will be reading more of her work soon.

From Goodreads: Jack Turner grew up in the darkness of London’s slums, born into a life of crime and willing to do anything to keep his belly full and his siblings safe. Now he uses the tricks and schemes of the underworld to help those who need the kind of assistance only a scoundrel can provide. His distrust of the nobility runs deep and his services do not extend to the gorgeous high-born soldier who personifies everything Jack will never be.  After the chaos of war, Oliver Rivington craves the safe predictability of a gentleman’s life-one that doesn’t include sparring with a ne’er-do-well who flouts the law at every turn. But Jack tempts Oliver like no other man has before. Soon his yearning for the unapologetic criminal is only matched by Jack’s pleasure in watching his genteel polish crumble every time they’re together.

Romance is an interesting genre because I’m willing to forgive certain things that I normally wouldn’t in other genres.  Sometimes the writing isn’t great or the story is unbelievable but this book surprised me with how well-written it was and how much I enjoyed the story and the characters.  Sebastian takes two stereotypical character types (the street smart guy and the stoic, rich guy) and makes them interesting.  I genuinely liked Jack and Oliver and was rooting for them the entire time.  The romance felt real and not rushed.  This wasn’t instalove, their relationship took its time and that was refreshing.  I also enjoyed how accepting the people closest to Jack and Oliver were of their relationship-if only the real world was like that.

Usually I don’t mind books that are 300+ pages, especially if I am enjoying it but this book was a tad too long for me.  By page 300, I was looking for things to wrap up but it took it’s time.  The mystery was a bit bland but I am willing to forgive that part of the story because I was liking the love story so much.

This book was charming and delightful, and I think any romance fan would like it, especially fans of historical.  I would recommend this book and I can’t wait to read the next in the series.

Favorite Quote: “Nobody had been more surprised than Jack to discover that when he was happy, he wanted to make others happy. What a soggy lot of rubbish, but there you had it.”