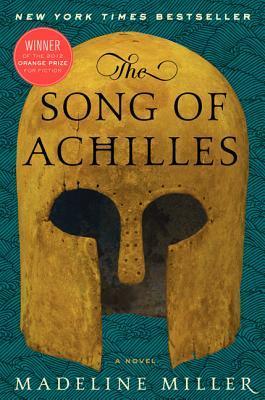 This was a book I read for one of the many book clubs I am in and I am so glad I got the chance to finally pick it up as I had heard great things about it since it was published.  This book did not disappoint and in fact exceeded my expectations.  This is a highly recommend book for me.

Set in Ancient Greece, this is the story of Patroclus, an exiled Prince and Achilles, the son of King Peleus and destined to be the greatest warrior the world has ever seen.  Their story starts when they are children and goes all the way to the end of the Trojan War.  Along the way, their relationship continues to grow and flourish, much to the dismay of Achilles’ mother Thetis.  Can their love survive all the obstacles thrown their way or are they destined to spend eternity apart.

This book was absolutely beautiful.   I was worried that I would need to know more about the source material going in to enjoy it but Miller does an amazing job of making the story accessible to people, even those who have never read anything about Greek myths or history. The story was intriguing and the characters were interesting but the writing is what I loved most of all.    After recently reading some books that I would consider good but that aren’t well written, this book was like a breath of fresh air and a reminder of what a skilled and talented writer sounds like.   Miller has a gift of making the mundane shine and her words and sentences drip with sensuality.  This isn’t a graphic books by any means but I found it very romantic and didn’t need anything more than what was written on the page. I have seen some criticism about the way Patroclus thinks and talks, especially in the beginning of the book, and that it’s hard to believe he would speak the way he does as no 10 year old has the vocabulary nor the emotional depth he displays.  I understand where this criticism is coming from but I was able to suspend my belief given the time period this book takes place in and because the writing was just so darn wonderful.

A few problems I had are minor and my personal issues, nothing to do with the writing or story.  The biggest problem I had is how Thetis was treated.  She is essentially the villain of the story but I understood why she did what she did and I think it is very understandable for her to be upset at the mortals that allowed her to be stolen from the sea, raped, and made to bear a child.  However, as this isn’t the story of Thetis, I can see why her character wasn’t given much background.  The use of rape and pillaging was a bit tough to stomach but again, this was completely reasonable behavior given the time period.  Otherwise, I have nothing but high praise for this book.

The tragedy of Achilles and Patroclus stayed with me for several days after finishing this book. I cared about what happened to them and was heartbroken by the end.  The writing was brilliant and I now want to read anything Madeline Miller puts out.  Do yourself a favor and check out this book ASAP.