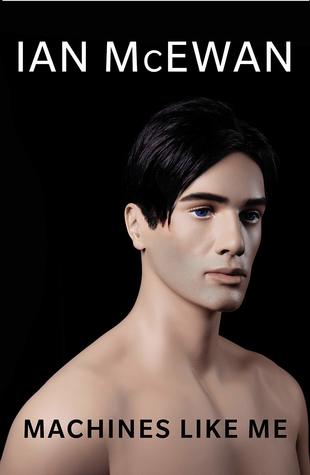 When people ask me who my favorite author is, I will usually say “Ian McEwan.”  Not because I love all his books or am always in the right mood to read them (they can be heavy), but because the way he writes is beautiful and he chooses topics that I find fascinating while bringing his own unique spin to them.  This book won’t be one of my favorites, but the ideas he introduces made me think long after I had closed the final page.

The time is the 1980’s and the place is London…but it’s an alternate version.  Charlie is an unemployed man who spends his days thinking of ways in which he will never have to work and pining for his neighbor Miranda.  When he inherits some money, he decides to spend it on the purchase of Adam, a synthetic human that has just been released to the public (along with his counterpart Eve).  What happens when Adam starts to develop human emotions?   Can Charlie and Miranda’s relationship survive when feelings of love and jealousy start to manifest in relation to Adam?  And what does Adam think of the world?

This book is hard to explain and somewhat hard to read. At its heart, it is trying to answer an impossible question:  what makes us human?  Through Adam, McEwan introduces the reader to the concept of programmable emotions and what the future could hold if we invest in artificial intelligence.   This idea is what I wish McEwan had spent more time on.  I wanted to see how Adam evolved and what he was thinking. I wanted to know how the programming Charlie and Miranda picked for him effected his personality and ultimately his feelings for Miranda.   I wanted to explore the purpose of the Adams and Eves.  Why do people want to own one of them?  Sex? Servitude? Companionship?  We get glimpses of this answer when Charlie and Adam encounter an Eve at the park but I wanted more of this in the book.  What I didn’t like was the alternate history portion of the story and the pages spent detailing what the government was doing.  I honestly didn’t see the point of this and struggled to get through most of the pages that were focused on this.  But just when I find myself getting bored, something happens to get me interested again and I find that I can never guess the endings of McEwan’s books. Even when I think I know what is going on, he flips things around and I am left surprised.

As is typical of McEwan, he takes paragraphs to say what some authors would say in a few sentences.  Sometimes this works, sometimes it doesn’t but you can’t argue the beauty in his writing.  A passage that stood out to me early in the book is a good example of this:  “There’s a certain sensuousness in an unshared bed, at least for a period, until sleeping alone begins to assume its own quiet sadness.”

While I liked Miranda and Adam, I found Charlie infuriating.   I have found this to be typical of McEwan’s protagonists.  I usually find they make me angry and Charlie is no different.  He constantly makes bad decisions and seems to be upset at everyone else but himself. He complains about his life and his relationship but then does nothing to fix either.  But I was still interested to see how everything would play out for him and was satisfied with the ending.

Ian McEwan books can be hard to read and this book was no exception.  I liked it but could see where others don’t, especially if this is your first time reading one of his books.  I would recommend this to fans of his but not as an introduction.

Favorite Line:  “It’s about machines like me and people like you and our future together…the sadness that’s to come. It will happen. With improvements over time…we’ll surpass you…and outlast you…even as we love you.”