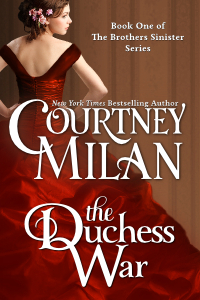 This was a book I read to fulfill a reading challenge I am attempting to complete this year—this book falls under the self-published category.  A lot of romances are self-published and Courtney Milan is a pretty popular author so I thought this would be a good choice.  This book wasn’t horrible but I found it slow and unengaging with so-so characters and a plot that never really grabbed me.

Minnie is content to be a wallflower after her tumultuous upbringing but everything changes when she suspects the Duke of Clermont of being the person posting political fliers throughout the city, urging workers to rise up and revolt.  When the Duke uncovers Minnie’s secret past, all bets are off.  Will this pair find love?  Or will their secrets tear them apart?

This was a pretty standard romance novel.  Two main characters, a few amusing side characters that will almost definitely get their own books later, some angst, some conflict, but ultimately a happily ever after. My main issue with this book was the lack of an exciting plot and the lack of chemistry between Minnie and Robert (the Duke).  I appreciated that Milan tried to create characters that weren’t cookie cutter but they just fell flat for me.  Minnie is head-strong and thinks for herself but there was nothing that set her apart.  Robert is a Duke who identifies with the workers he is trying to liberate but nothing really happens with that side of the story and while his intentions are good, there wasn’t any substance to him.  I also didn’t really believe the dialogue and banter between them and thought that the chemistry felt forced.   There really wasn’t anything wrong with the love story, it just wasn’t compelling to me.   I did find myself enjoying the side characters, Lydia in particular, but it wasn’t enough to keep the story interesting.  Honestly, the thing I liked the most was that both Minnie and Robert were virgins in this book.  So many romance novels feature a virgin heroine and a sexually experienced hero.  It was refreshing to read a story that had both be inexperienced.

All in all, this wasn’t a great book but it wasn’t the worst.  There was nothing overtly bad about it, it was just meh.  I would be willing to give another Courtney Milan book a chance but was left wanting more with this one.