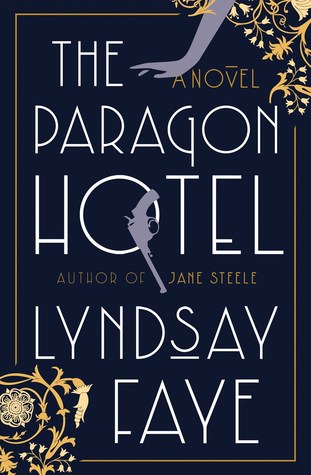 It took me a long time to read this book, not because it wasn’t good or because it’s over 400 pages. It took me a while to read it because the language used and the writing style was unique and beautiful and I wanted to take my time savoring every word and phrase written on the page. Although it took me a few chapters to get used to the way Lindsay Faye writes and her use of period-appropriate terms once I was able to wrap my head around her style, I was hooked. I normally don’t read historical fiction but this book was great and I highly recommend it.

Alice “Nobody” James is on the run. She finds herself shot, nursing her wound, on a cross country train from New York to Portland with a suitcase full of counterfeit money and a past she is looking to forget. While on the train, she meets Max, a porter who sees her in distress and brings her to the Paragon Hotel, the only all black hotel in Portland. The residents of the hotel temper their unease and allow her to stay under the guise that she is writing an article about them but she soon finds herself caught up in their problems brought on by the arrival of the Ku Klux Klan and the disappearance of a young, black child. As the city starts to become more and more dangerous, Alice and the residents of the Paragon Hotel must reveal their secrets to each other and face their pasts head on if they want to find the boy and deal with the KKK.

This book shouldn’t work as well as it does. Faye somehow writes about the Mafia in New York and the KKK in Portland with equal attention to detail and history while also introducing the reader to multiple characters that are all well thought out and integral to the story. What would have been a jumbled mess in the hands of a lesser author instead turns into one of the best books I have read in a very long time. I will warn readers that it took me a few chapters to get used to Faye’s writing (I blame the accurate terminology she uses, which is a good thing!) so don’t give up if you find yourself a little confused, especially when Alice refers to herself as the different “nobody’s” she is. There are so many storylines that it would be easy to become lost in such a book but Faye does a great job of keeping the readers interest in all of them, especially the mystery of what happened to Davy Lee. Most mysteries seem easily solved but there were twists and turns that I did not see coming and I did not guess the ending of the book. (If you can, bravo but it took me by genuine surprise!) What really made this book great was the relationships between the characters and the intimacies they share with each other. The residents of the Paragon are like family, and as such, love each other while still having their issues and problems with one another. As each resident’s past was revealed, I found myself more and more interested in them and how they came to be at the Paragon as well as their role in the disappearance of Davy Lee. Not everything is what it seems at the Paragon and I liked how Faye chose to slowly reveal secrets as the book went on. Every character was interesting—in fact, I would love to see more written about the residents of the hotel.