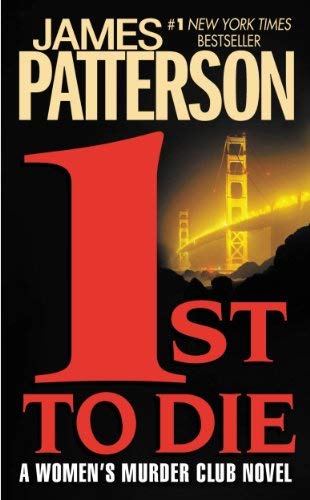 This was my first time reading a James Patterson book and I chose the first in the Women’s Murder Club series because I had heard good things about it and Patterson actually wrote this book himself.   (He is notorious for only writing a fraction of his books and writing outlines he gives to his co-authors to write the rest:  https://www.washingtonpost.com/lifestyle/style/james-patterson-doesnt-write-his-books-and-his-newest-readers-dont-read/2016/06/06/88e7d3c0-28c2-11e6-ae4a-3cdd5fe74204_story.html?utm_term=.65688512e329)

The four women that make up The Women’s Murder Club are Lindsay Boxer, a San Francisco police detective, Claire Washburn, a medical examiner, Cindy Thomas, a newspaper reporter, and Jill Bernhardt, an assistant district attorney.  The protagonist, Lindsay, is trying to solve a group of killings called the Honeymoon Murders and starts the group as a way of discussing and attempting to solve the case.

Right off the bat, I could tell why people like his books.  They are quick and to the point.  No scene is wasted nor filled with flowery language.  His characters speak like the average human; no big words or eloquent prose.   The characters are what you expect, cookie cutter, and without a lot of depth.  The chapters are quick and were almost done before I could realize a new one had started. There is a twist towards the end that is fairly obvious to a casual mystery reader and there was really nothing special about the reveal of the killer.  Only one part surprised me and that was the death of a character; this caught me off guard and was unexpected.   The rest of the mystery was a quick solve and every piece of evidence seemed to be found at the exact right moment.   This is not a work of literary genius…but it’s not meant to be. It’s meant to be a book that you can read fairly quickly, that you don’t have to think too hard about, and that wraps up in a way that makes you want to pick up the next book in the series as soon as possible.   The thing is, I didn’t hate this book.  In fact, I gave it 4 stars.  Why?  Because sometimes you need a break from reality and 700 page books and immerse yourself in fun book.

One thought on “1st To Die”